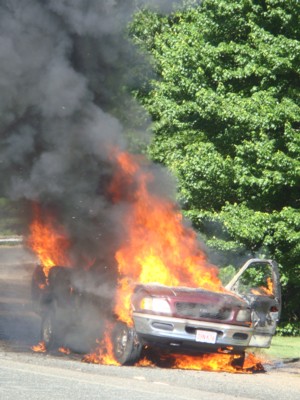 Around 9:20 this morning, a Ford pickup truck cought on fire and burned out of control.

A state trooper was there only 5 minutes later. At the time I left, the truck was still on fire. An explosion blew a smal fireball to the left of the truck while I was taking pictures.

The fire departments of Holland and Sturbridge were called. 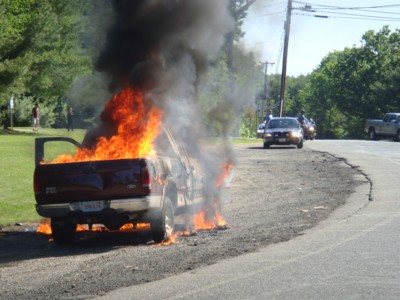 Nancy Talbot running for reelection for the tax collector position to hold four hour seminar at the senior center.

If re-elected, Nancy Talbot will show her gratitude for the voters trust by conducting a four hour seminar at the Senior Citizen Center.
The seminar is planned for Wednesday June 16, 2010, from 2 p.m. until 6 p.m. The date was chosen to honor Earl Johnsons birthday, Earl is a close friend of her. Earl will assist Nancy in answering tricky questions if his health will allow him to attend.
Nancy Talbot was accused by a resident of Holland to have been involved in a questionable land-deal.
In a recent interview with Christopher Tanguay from the Southbridge Evening News, Nancy realized that there are some lingering questions in the community stemming from the incident and decided to be proactive and root-out all suspicions. The land my son purchased was not in tax title, Nancy said to Tanguay and further stated, Not only was it not in tax title, it was not even delinquent and it wasnt going into tax title.
Actions are louder than words; To clear her name once and for all, she will have the opportunity to show (and teach others) how her son was able to buy the building lot at the peak of the real estate boom for only $100!
The conveyance recorded in book 17,317 on page 311, carrying the number 35,509 took place on May 29, 2008. Derics deed is recorded at the Registry of Deeds on 50 State Street in Springfield in book 17317, page 311. To view the deed, click here!
Once Nancy is reelected I will ask her and Earl whether they are interested and will then organize the seminar. Place will be limited, please reserve your space by emailing me, thanks!
I hope she and her mentor are as thrilled as I am, I cant wait...
Peter Frei

Earl Johnson attended the last annual town meeting as selectboard member; James Wettlaufer is not credible any longer; and Christian Petersen joined his two colleagues in their quest to promote a project that would have violated not less than 16 provisions under the bylaws or other rules and regulations.
However, the voters of Holland used sound judgment and dared not to follow the advice of their leaders, and do it right. The disabled and seniors deserve it, read more» 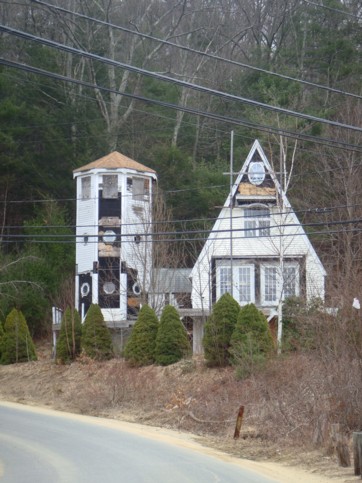 Throughout the day, I will gather information and will post it here and add as the day progresses, so check back if you can. If you don't like the way our town is run, be there tonight and voice your opinion! Certain articles on the town warrant need your attention, here is what I gathered so far:


Article #3, #4, and #5 seek authorization by the voters to authorize the Board of Selectmen to grant easments and to enter into a lease agreement to lease the 2 acre town owned property to HAP, Inc. in order to acommodate the proposed low income housing project for seniors.
The voters have a last chance to force HAP and the town government to find a better solution for the project.
If the voters vote YES on article #5, the project will be built, if the voters vote NO, the project can not be built at the proposed site.
YES Votes on article #3 and #4 will just make it easier to realize the project but are not necessary for the project to go forward.
There has been strong opposition by several residents towards the project's realization on the proposed side as the 2 acre parcel does not allow the construction of the Project,
To read more about article #3, #4, and #5 click here!»

Rumors that Jean Sullivan and Karen Wallace went separate ways first made the round about three weeks ago.

Some pictures of yesterdays 5k race.

There is always something going on in Holland, read more»

Team HOYTs opening for the season, book signing, and more!

Dick Hoyt and his son are a busy duo, tomorrow, Sunday May 23, Team Hoyt will participate on the Holland Elementary Schools 5K race starting at 10:00 a.m. There will also be a kids 50 yard dash as well! 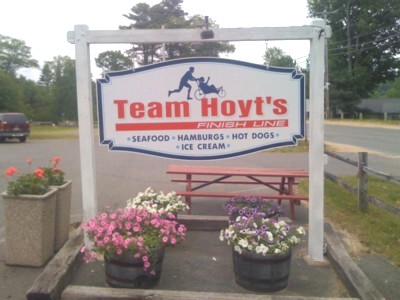 Hoyt's drive in restaurant on 154 Mashapaug Road will open next Friday, May 28. On Saturday, May 29, Rick & Dick Hoyt will sign their two new books at their Team Hoyts Finish Line Restaurant from 1:30  3:30 p.m.
Dick Hoyt will celebrate his seventieth birthday on Tuesday June 1! But he is not slowing down, the father son duo recently published two new books - their first is Rick's Story - The Story of Rick Hoyt - written by Sherrie Ninteau. This is the inspiring and touching story of Rick Hoyt, written for children, to teach them about disability awareness. Their second book is Devoted - The Story of a Father's Love for His Son - written by Dick Hoyt with Don Yaeger. The story, told through the eyes, voice, and feelings of Dick Hoyt, shares in detail the events which created the inseparable bond between him and his son Rick.
Peter Frei

Wales not to be bullied by James Wettlaufer.

Wales residents sent a clear message to the leaders of Holland; the rejection of the proposed regionalization of Wales and Hollands Elementary Schools came as no surprise for many. Read more»

Im attending the Wales annual town meeting. The voters of Wales just voted on article 12. Article 12 is the question on the warrant whether the voters of Wales are in favor of regionalizing their elementary school with the one of the town of Holland. The vote count is:
54 votes in favor, 101 against the regionalization of the elementary school. More when I'm back home!
Peter Frei

Brian Johnson, where are you? 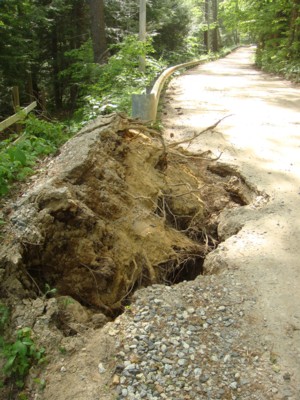 I got a phone call from an upset resident who is living on Maybrook Road. He allegedly called the Highway Department several times in an attempt to report a big hole in the road caused by a tree that got blown over during the recent windy days we had. His phone calls were ignored, allegedly nobody answered the phone and at least one message was left with the request to be called back.

I know that you, Brian Johnson, are only working a four day week and that there is nobody at the Highway Department on Friday's.
Brian Johnson founded and incorporated his own Construction Company back on November 18, 2008. Brian Johnson is the President of J&G Construction Inc., J&G stands for Johnson&Gendreau. Scott Gendreau is one of the Highway employees and is listed as the vice president of the Company who's business is officially GENERAL CARPENTRY AND ROOFING. Kyle Rutkowski, another Higway Department employee is also involved in the cosy company as the director. The Holland Blog reported about Brian's busines in the piece Office or residence? 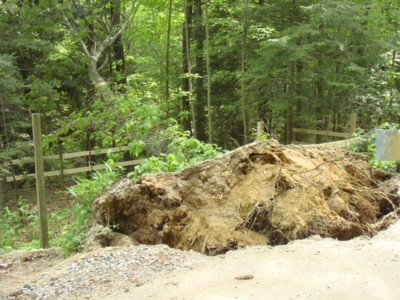 The large hole in the road is not marked or secured and is a potential safety hazard, especially at night. Maybrook Road is very narrow at the spot where the hole is and something needs to be done before somebody gets hurt!
I called the HPD and informed the dispatcher of the situation.
Peter Frei 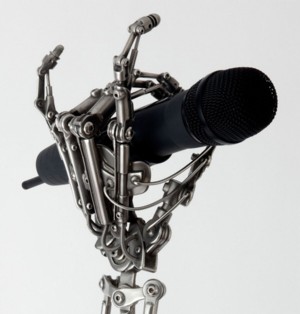 The Holland Blog received this notice:
When:
May 18th at 7:30PM directly following Selectmens Meeting, it will be televised!
Where:
Town Hall Community Room. Questions will be allowed, and must be in written format, SIGNED and addressed to the Moderator, Dora Metrelis. Questions must be directed to both candidates for an office, not a particular candidate, because both candidates will have the opportunity to answer. Questions will not be allowed if they are personal in nature, obvious attacks or in any way deemed inappropriate by the moderator.
The Candidates Night is organized by Kristin LaPlante, our town clerk.