Wettlaufer's Board of Selectmen wasted $68,540.48 on unnecessary lawsuits and counting.

The Holland Blog obtained invoices in the amount of $68,540.48 Wettlaufer's BOS paid to attorney Sapirstein for unnecessary frivolous lawsuits, private lawsuits, appeals, and also defending Brian Johnson against a Criminal Harassment Prevention Order sought against him. 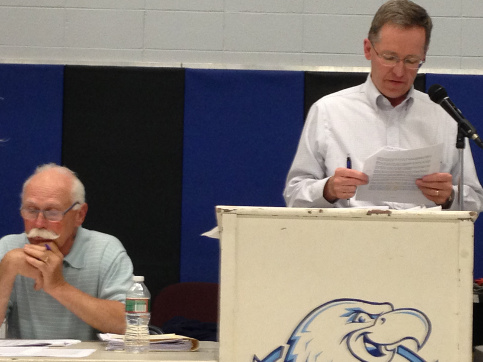 Picture: Annual town meeting, May 27, 2014. James Wettlaufer, chairman of the Board of Selectmen sitting on the left; William Hardy, moderator, standing on the right.

The invoices can be viewed by the reader, read more»

Posted on 8 Jun 2014, 11:36 by Mike LaMountain
Pretty Crazy
Can someone please try to justify these expenses? All I see is an evil man spending money that isn't his to punish people he doesn't like for trying to do stuff on their own property. If maybe we had just made sure he got his cut perhaps we could have built a truck stop on our property. Maybe we could have built a bunch of houses on land locked property like the Johnson's did on Stafford rd?

I read Wettlaufer's flyer about how great he is. What about this $70k Jim? How come you didn't write a paragraph on your flyer mentioning how in the town's best interest you spent $70k to punish citizens of Holland with unnecessary lawsuits? It's not like we are major corporations trying to build a truck stop in Holland. The people that you used your super lawyer to punish, Chad, Dad, Me, Peter & also Trenton are people who truly love Holland. It is one of the best kept sanctuaries in central/western Mass. I could not think of a better place to raise my children. That is until we have to deal with the town hall, mainly king Wettlaufer and all his cronies.

These receipts Peter provided raise a lot of questions that anyone that voted tomorrow should consider. I say vote the bum out.