I learned that Heather and James Wettlaufer attended (for the first time) the annual pan cake breakfast organized by the Hamilton Reservoir Association. The Wettlaufer's showed a picture they carried on their cell phones to everybody who would listen and claimed that it would involve me or the Holland Blog. The picture shows Earl Johnson's gravestone right next to one of James Wettlaufer's campaign signs. The Wettlaufer's downloaded the picture from the facebook page with the name 01521.com. I have neither anything to do with that facebook page, neither do I have anything to do with the picture. As far as I know, the facebook page was created and is maintained by James LaMountain. I also learned today that someone allegedly pored gasoline over Earl Johnson's gravestone. I denounce actions like that in the strongest terms. The fact that a jury found Brian Johnson's behavior to be, “extreme and outrageous and beyond the bounds of decency and intolerable in a civilized society,” does not give anybody the right to behave the same way towards the Johnson's. Heather and James Wettlaufer, I assume, didn't know any better and are excused as they must be under a lot of stress right now (and desperate).

Posted on 9 Jun 2014, 18:05 by James P LaMountain. .. ..
Wettlaufer Johnson picture
I would not and did not throw gasoline on anyone's grave and I never pissed on Earls grave neither..
I found the photo that I shared on Karen Tavervier and Kristin LaPlants Facebook pages.
. I did find the photo somewhat humerous and I think Peety would have appreciated it too.
I have heard the grass in the graveyard was green everywhere but over Earls Grave..and has been that way for some time. If that was my Dad buried there his grave would certainly be lush. Even more if I was Cemetary commissioner and highway super..Some kids don't care.

Posted on 11 Jun 2014, 13:30 by ..........
WettlauferJohnson Pic
You calling me a liar now Mr Frei. When I say I found the photo on those pages you can be sure it was there. I never said it originated with them. You AND Your readers are free to comprehend the English Language in my post according to your own minds and souls. If you are trying to locate the person who PUT the sign there.. Look Elsewhere.

Posted on 11 Jun 2014, 15:07 by What she thinks of Wettlaufer opponents.
Karen Tavernier Comment
Karen took down her page and photo. To see what Karen had to say about " Dirtbag" Wettlaufer opponents prior to the election you can go to My Facebook page @ Jim LaMountain where I will re-post the Tavernier screenshot with her comment. 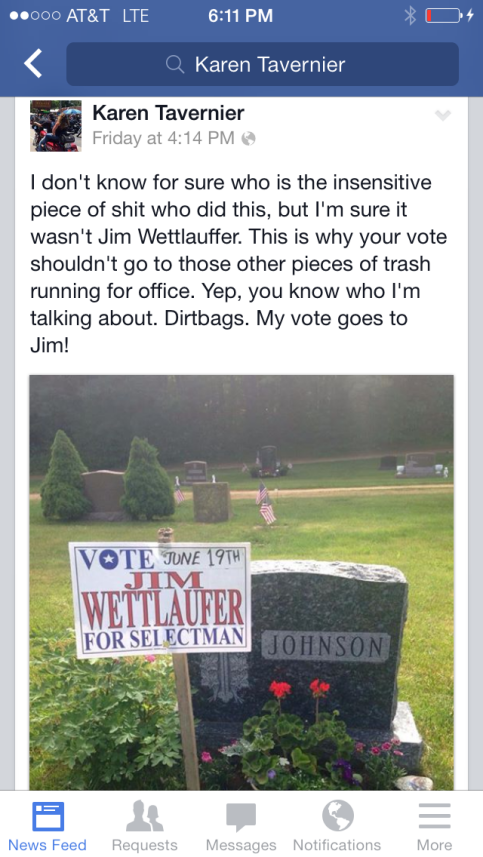 Posted on 11 Jun 2014, 18:17 by The rest of the story...
New sod
So the entire graveyard is lush and green ... But not Earl Johnson's Grave..
Earls Grave is covered in dead brown grass... Like it refuses to grow....why is that... ???...
It's not from gasoline.. It is a perfect outline of the excavation for the vault.. I've dug a few graves myself over at St Rochs.
So there is a sign and some dead grass and voila...the spin comes out as JW and BJ try to spin another web. ..... an 11th hour grasp to garner votes.
Anyhow here is what REALLY happened.
Brian Johnson and his gang went out and bought some sod to put over Peety's (RIP) resting place...sod is fickle and requires daily care or watering....''''.... if not cared for it will die.
Great job Cemetary Commissioner/ highway surveyor Brian Johnson. It was your substandard workmanship that caused the new sod that u installed to die. ...... Such a shame...

Posted on 8 Aug 2014, 13:41 by Serpent Tamer
Follow Up
So the Saga continued after the election.
Wettlaufer went to the cops on Election Day and cried about the picture. He also said I poured poison on earls grave and killed the grass.. ( in a perfect rectangle outline over the new sod only.)
So Wettlaufer also said in his statement that the caption " keep the team together " was meant as a death threat to him.( he must have forgotten the slogan from earls 2007 election was also keep the team together.)
Wettlaufer was so scared he then filed a restraining order and had the cops deliver it to me. ...The cops filed charges against me for larceny saying I stole Wettlaufers sign..
They also filed charges for desecration of a grave and ALSO for destruction of town property for the dead sod. Other than a picture there was no evidence or cause for them to file any charges.
So I go to Court first for Wetlaughers restraining order... Judge conducts a FULL hearing and terminates the order immediately.
Five weeks later I go to Court for the Criminal Charges filed by HPD. ..
Magistrate hears the police report.. Magistrate asks for evidence.. HPD has none.
. Magistrate then says he has no time for such foolishness and throws the case out..
So now it is over ..I would cause no harm to JW..
Karma seems to be dealing with him and his reward is worse than Death.

Besides we have other fish to fry.
Jim L.