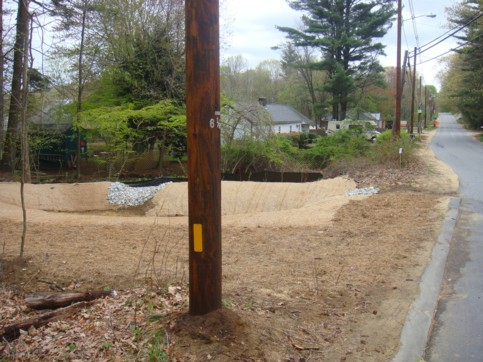 Earl Johnson did what he and other members of the Johnson clan do best, disseminating fictional information.

Watch the video of the meeting or, read more»

Posted on 28 Apr 2010, 20:51 by Don
Can't Wait for June 7
Thank the Lord, my prayers have been answered. I can't wait for June 7 when Earl Johnson will no longer be a selectman. I stopped watching selectmen meetings a long time ago because Mr. Johnson (& sometimes Mr. Wettlaufer too) actually made me sick!! Now I (and others) can start to heal. I thank both candidates (Mr. Kennedy and Mr. Korny) for running for the position. And how ironic that NOBODY nominated Mr. Johnson to run for re-election at the caucus nor did anyone take out nomination papers to encourage him to do so. Good riddance to bad r------!! Voters have taken the first step to improve the morale of this town.

Posted on 29 Apr 2010, 9:59 by wifey
dinks
to: Xenophon (Earl) Just so you know: We, the residents, (not myself) voted the dink Earl Johnson to be in charge. He has supporters in this town who went out and voted for him last time. Those unaware, uninformed, uneducated voted for him and the likes of him (Brian Johnson, etc.) My husband attempted to run for his position and was outnumbered. He had friends come to vote who hadn't voted in years. Myself and others saw the same people go in more than once and vote, under other peoples names for EJ and his clan. Can't prove it but my gut tells me it was done. That's how they roll. It's politics, it's dirty and it's who they are. The only way to do something is to get involved and get people behind you. Rally or hold a Debate and they won't allow it. Try and see what happens. His "followers" are not willing to take Peter's website seriously. They are minions whom have no desire to do some fact seeking on their own. Peter has laid it out here. All they have to do is follow the links or do some of their own research. Hope the June votes go in favor of a new start in this town. We will see right?!
_________________________________________________________________

Posted on 29 Apr 2010, 22:55 by wifey
in reply
First of all my husband isn't abusive, thanks for that. We don't use violence to solve our problems. Never said the people that run the poles were uneducated. The turnout was the largest seen in many, many years. So quite possibly with that turnout, they many not have been aware of people either voting twice or whatever trick they used to get those votes. 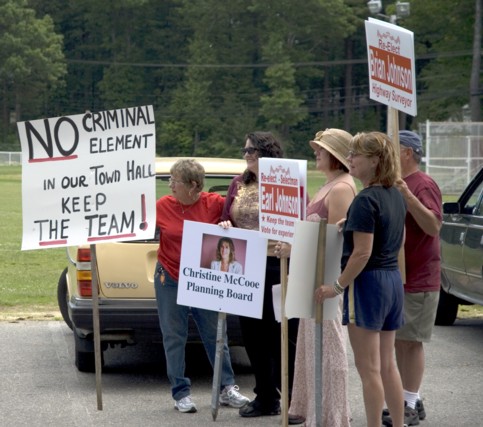 Posted on 4 May 2010, 13:37 by Concerned Citizen
Consider the source!
Earl Johnson's claim LaMountain loses all the time seems to be false after Judge Moriarty's ruling. What ever members of the Board of Selectmen are telling you, consider the source!
In case you missed it in the Telegram:

HOLLAND  A resident who operates a farm has won a court battle he has been waging with town officials.

In 2006, the town and the state Department of Environmental Protection ordered Mr. LaMountain to stop burning brush on his property. Mr. LaMountain argued the burning was an allowed use under a state exemption for agricultural use of land.

The judges ruling confirms what Mr. LaMountain claimed since his legal battle began in 2006.

Under the law, farmers are exempt from the Wetlands Protection Act. Open burning can only be denied if weather conditions are unfavorable.

Judge Moriarity denied the towns request for a permanent injunction to prohibit Mr. LaMountain from open burning of brush.

In July 2006, Fire Chief Paul Foster filed a complaint in court to prevent Mr. LaMountain from burning brush on his 80-acre hillside property off Mashapaug Road.

In an unrelated action, the DEP issued a $12,150 fine in May 2007, claiming he violated the Wetlands Protection Act when he cut wood in a wetlands buffer zone, which he is entitled to do under the farming exemption.

Mr. LaMountain appealed both matters. In August 2009, Administrative Magistrate James P. Rooney of the state Division of Administrative Law Appeals reduced the fine to $100. At the time, Judge Rooney said I am concerned by the amount of time and error local and state officials, as well as personnel of Northeast Concepts, have expended over burning conducted on the site. While some matters are worth extensive litigation, this is one that should have been resolved more readily and with far less rancor.

Despite the August 2009 ruling, the towns lawyer filed another lawsuit in September 2009 against Mr. LaMountain and NEC that sought a permanent injunction, which resulted in the most recent ruling. Mr. LaMountain said he intends to seek damages from the town for litigation costs. It cost me between $75,000 and $100,000 to fight the town to stop them from interfering with my right to farm, he said.

Mr. LaMountain added, We declared our agriculture intent to the town in 2006 in writing and the town chose to ignore that declaration. Instead they chose to spend hundreds of thousands of taxpayers dollars to deny us our right to conduct agriculture activities. Judge Moriarty has sent a message to the town and all officials that conducting agricultural activities is a protected right, because we all eat.

COMMENTS posted AT THIS TIME:

Its nice to see the legal system acknowledge that the rules apply not only to those being regulated, but also to those empowered with enforcing the regulations. Reminds me a bit of why this country was founded some 234 years ago.
Posted by An over-regulated citizen

I sincerely hope you recover your damages. you deserve it and they, the town, deserve the pain you may inflict upon them. Its so sad to think they wouldnt take the time to talk to you and resolve such a petty issue. Go for the gold my friend.
Posted by Zingo

Hard proof that you *can* fight city hall *and* win.
Posted by Fight to win

way to go Jim, holland isnt anything but a bunch of uptight jerks that think no one is higher then they are. i myself am a victim of their politics and arrogent and know it all people.
Posted by dolly

Bravo for this local farmer! I hope there will be some restitution for him and his livlihood of farming. The town should pay all of his legal fees. There are farmers all over this state and country who could be the next target by overzealous groups, like the environmentalists in California who are saving the poor minnow fish while at the same time endangering all the lives of farm workers, their farms and all the living plants they once grew to feed America and the world. Hopefully, there is insurance for this farmer for such nonsense. We certainly need change in the politics here in MA if we are to continue to maintain our freedoms.
Posted by fishtail

I am glad to see the newspaper finally proffer an unbiased accounting of the LaMountain saga. Judge Moriarty did say it best... he scolded the town for their rancor against Mr. LaMountain. Rancor means to harbor bitterness and long lasting resentment. His statement was profound, and SPOT-ON. The town of Holland has indeed been harassing LaMountain for years. While the town officials go after others too.... it is still a selective persecution. If you are in the club you wont be bothered for having too many unregistered vehicles on your property or changing the footprint of your lakefront home without proper permits and variances. Some folks even use driveways as frontage to then be able to build homes (this is a direct violation of state laws...not Holland by-laws.) People beg officials....state officials? for help. WRITE A LETTER to them! There will be no help without a WRITTEN request for such help. The Attorney General is obligated to REPLY to0 all the letters it receives. If they cant help directly, they will tell you who to contact that can help! The other thing to do is GET OUT AND VOTE! The faces you see at the town hall will not change and the corruption will continue, if you dont go vote!
Posted by Sally

Im appalled at the lack of professionalism in Holland. ..and the fire chief not being knowledgeable of state and federal laws? How embarassing (and dangererous). You would think that he could have worked *with* the last remaining endangered farmers in MA instead of burning a fire trucks value in town funds on this ego-pitting ignorance! If the board of selectmen are so poisonous to you town, Holland, then vote them out of office! This is so pathetic and avoidable.
Posted by need_more_professionalism

The towns people should remove the people responsible for the spending the towns money like this... shame shame on this town..sue for double the money...wake up...
Posted by stevens

And what farmers do FOR the land enables you to eat drink and be merry. Im for the farmers!!!
Posted by Not Just Another Farmer

Its clear which posters here were on the losing side, those making unsubstantiated allegations of misconduct against Mr. LaMountain. Shameful, as is the fact that the T&G has allowed these posts to stand, though they are in clear violation of their own policies regarding comments.
Posted by Im Just Sayin

Its time we made the Wetlands Protection Act applicable to farmers. What they do to wetlands eventually affects all of us. There is no need for exemptions for farmers.
Posted by no exemptions

Thank you Telegram for finally reporting this....anyone interested in the corruption in the town of Holland in which I live should go to 01521.com and read up. This is a classic case of corrupt officials who think they are the law and can do whatever they wish at the cost of the taxpayers....If there is ANYONE who can help our town PLEASE investigate the corruption....PLEASE I/we the town BEG of you help us stop the corruption....as far as the pothead remarks....so sad...so sad....even if it were true go ahead and give him a $100.00 fine Im sure the poor guy would be ruined over that......PLEASE HELP US!!!!!
Posted by Maxxwelhowser

You go.Its about time someone showed these people that the law can still work.
Posted by happy