The first time I encountered this name was when I read the January 31, 2008, issue of the Tantasqua Town Common. Mr. Harhay wrote as a guest columnist a piece in favor of the upcoming tax levy override vote with the title “Save Holland with override vote.” I wondered why he was in favor of higher taxes. I found out that Mr. Harhay is a member of the Finance Board or Finance Committee. I wonder why he did not reveal this telling information in his column.

Andrew Harhay subsequently bought a parcel from Oliver L Howlett for $225,000, see deed book 15798, page 512. The parcel located at 430 Mashapaug Road is a piece of the 451.36 acres of land Anthony Grossi and Michel Bergeron bought back in 2003 for $1,000,000 (1 MILLION). The same parcel includes the land which the two individuals plan to sell to the Flying J Inc. for the planned truck stop. 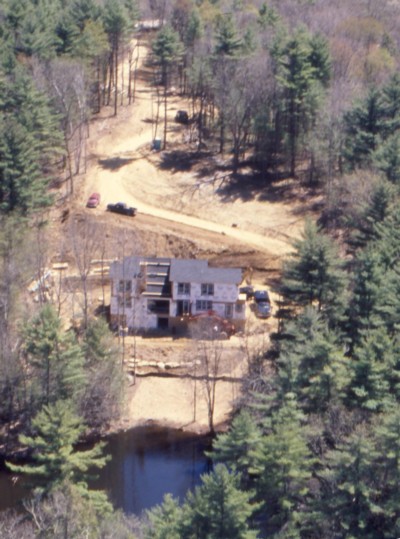 The required side setback for the dwelling is 50 feet from the adjoining lot because lot 5 is abutting a different zoning district. Again, the Zoning Board of Appeals (ZBA) granted a hardship variance see book 16782, page 375. The “hardship” that allowed issuing a variance was self created by the developer when he created this lot. Issuing the variance is unlawfull, contrary to the statute c.40A, s.10 and decisional law by the Supreme and Appeals Court of the Commonwealth. The variance was issued to maximize the developer‘s profits. As reason for granting the variance the ZBA noted:

“If the land was to be used for commercial purposes, a 50 foot setback was required as the property abutted a residential neighborhood.”

This sentence is totally misconceived. Land zoned “Special Conservancy” can not be used for “Commercial” purposes. The sentence does not make any sense; uses in a residential district are less restricted and the side-setback requirement is only 20 feet regardless of the abutting parcel’s use. Furthermore, the zoning bylaws do have two entries under Table 2, Table of Dimensional Requirements, they are:

Both entries require a side setback distance of 40 feet if the locus abuts a non-residential district, and 50 feet if abutting a residential district, and rightfully so. The front setback requirement of 100 feet is also greater than the front setback requirement in the Residential District. The reason for larger distances is obvious and can be found under article 6.21 of the zoning bylaws:

“Purpose: To conserve the unique landscape, wetland and ecological features, and high quality groundwater associated with the land in this district by limiting multi unit development to low density institutional, educational and recreational uses.”

The increased setback requirements are effectuating the sought “low density.”

The 40 foot requirement allows an owner of special conservancy lot to build closer to non-residential zoned land, 40 feet instead of 50 feet, if such owner wishes to do so. A structure and/or use located in a Special Conservancy district is less likely to constitute a nuisance to the non-residential abutter.

This analysis unravels the maze and brings logic to the bylaw while exposing the misconceived interpretation that forms the basis of the false argument made by the ZBA in its ruling. The ruling allowed Harhay to build his dwelling based on a variance. But even more disturbing is the fact that the misconceived interpretation of the bylaws made in the ruling was the reason for an unnecessary bylaw change which in its current form undermines the purpose of the Special Conservancy District to some extent.

“The existing 40 feet setbacks already take away 80 feet of land from a lot which is only 150 to 160 feet wide [that‘s how the developer designed it]. This leaves a relatively narrow area in which to build a structure. [...] When the building inspector reviewed the package [plans etc.], he discovered a bylaw that required a 50 foot side line setback […].”

All along it was my opinion that our bylaws are convoluted and a big mess. However, “discovered” is not the right word, Christopher Columbus “discovered” America. Discover has the meaning of, “to notice or learn, especially by making an effort;” or “[t]o be the first, or the first of one's group or kind, to find, learn of, or observe.” This locus was a narrow lot and was created that way to maximize profits.

The point is, if it takes a Christopher Columbus to navigate through the zoning bylaws of Holland, and obstacles are put away by variances and even changing bylaws for the cronies, what good are zoning bylaws other than an instrument to be applied arbitrarily; ignored in favor of the lucky few, and applied against individuals critical of the one‘s using public office for personal gain?